That’s really something to think about.  No toaster for 15 years.

I’ve known for a while that I wanted… no, needed a toaster.  I’m not a huge toast eater but I have a kid, and that kid?  She likes toast.  She also likes waffles, french toast, english muffins and bagels.  These are all things that can be toasted in a toaster! In our old house we had a toaster oven.

I know what you’re thinking but no, it’s not the same thing.  At all. 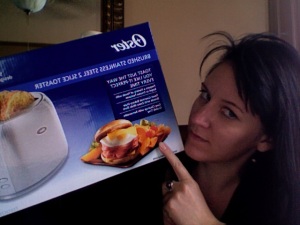 The house we live in now has a very small kitchen.  Now I love our house to bits and pieces but having a small kitchen is tough, especially if you’re like me and are a fan of large appliances.  We have a mighty stove and fridge.  We recently replaced a large microwave with a smaller one (and by recently I mean we bought the microwave at the same store at the same time as this toaster I’m going on and on about because our microwave decided it wanted to go away).

How have I been toasting things for the 5 years we’ve lived in this house you ask?  Good question.  Great question.  I’ve been using the broil feature on my big ol oven.  It’s a great oven and it does toast things but it’s not really the most efficient use of resources.  So after possibly 15 years of being toasterless I bought one.  It’s beautiful.  It’s wonderful.  I imagine that it toasts things really well but I can’t say for sure since I haven’t taken it out of the box yet.

I have to be honest with you though, I’m already a little bit disappointed.. You see that food item I’m pointing to? 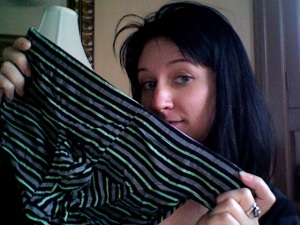 I thought it was Eggs Benedict.  I didn’t realize it was a bagel with cheese, ham and an egg until I sat down to write this and I’m a little sad about it.  I liked to idea of buying a toaster with my very favorite breakfast food ever on the box.  I had amazing dreams of the perfect breakfast made for me by my sexy husband.  Maybe he was wearing a little apron and a cute pair of green and black stripy underwear.  But I don’t want him to make me that crazy looking breakfast thing…

Maybe he’ll make me Eggs Benedict anyway.  I’ll let you know how it goes.  With the toaster I mean.. not the underwear.  Jeez is nothing sacred?