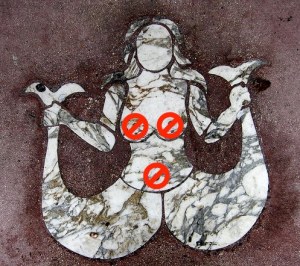 Mermaids are sirens of the sea.  Beautiful creatures that some want to posses and others want to be.  40 years ago when Starbucks became a company they had a logo oh so very different than the one they have today.  It was a mermaid with tits, midriff and tail.  You know.  The mermaid trinity.

Over the years they’ve changed their logo and each time they’ve done it they’ve simplified the wording and design and at the same time taken out a bit of what makes the mermaid so mystical and loved.

While I noted it to myself before, it wasn’t until today that I got a little baffled, for lack of a better word, by their complete desexualization of the mermaid.

In a society which inappropriately sexualizes tweens and teens (both boys and girls) with inappropriate clothing, shoes, hair products and makeup I find it so strange to strip the fairly innocent sex appeal of a mystical sea creature. What’s next Starbucks?  Are you going to put her in a suit and tie?

5 thoughts on “birds do it, bees do it, but mermaids apparently don’t…”

The bunnies of Cannon Beach are always a highlight for me. This little guy was friendly!
at the beach with my loves… what a beautiful day it was.
I think we’re gonna need a bigger boat… #jaws #shoes #vans
I have the sweetest parents…
memories… ripper was the cutest cat ever… miss you lil cranky old man cat.
Last selfie for the day, promise. Silver hair, polka dots, tattoos, and red lipstick… haven’t felt this “me” in years. Thank you soooo much @style_by_nicolettec… you’re amazing. 😘❤️❤️
After… super excited to embrace my silver…
Processing…
Current hair situation… we could call it a before.
Follow CamiKaos on WordPress.com