Some days are more important than others when you look at the big picture, and I’m sure someday when I look at that picture this particular day may not mean as much as it does right now…

A little before 10 AM I headed out with Missburrows to do some shopping, the day passed quickly and as she dropped me off at K’s school 5 minutes before pick up time I was thinking ahead 4 1/2 hours to the PTA meeting I needed to go to. I strolled onto the playground with my purse slung over my shoulder and my purchases in a bright red bag and I waited.

Some days it seems to take forever before the kids are let out for the day and I can head home so I busied myself talking with a few of the parent’s from K’s class and friends from the neighborhood. I made plans to go to the PTA meeting with a few gal friends and then waited impatiently for the next 60 seconds for them to let my kid out for the day…

And then she was by my side and we were strolling off hand in hand heading home. She was hungry so I pulled a bag of craisens out for her to nibble on. Moments after she bit down on the first soft dried cranberry her face twisted in agony… I’m sure it was just discomfort but to her it was horrible pain. Assuming she bit her cheek I told her it would be fine and smoothed my fingers along her cheek. She popped another craisen into her mouth and her prior reaction was duplicated… and then as we were crossing the street the tears came. Once we were safe on the other side she told me her tooth was bugging her and I leaned down to look at her mouth… that’s when I saw it.

Oh.Dead.Lord. WHY IS SHE BLEEDING?

I mean I totally knew why she was bleeding, she had a loose tooth. What I meant was WHY NOW? Why not when her dad was home or when she was at school or any moment that didn’t require me to do tooth related parenting all by myself.

You may recall months ago she thought she had a loose tooth and wanted to show me but it turned out that tooth really wasn’t that loose at all. But I never really looked, so how can I be sure? Because that was in April…

I bit back my trepidation and told K how exciting this was, how great it is that she was about to lose a tooth! She burst into tears and I had to pick her up to keep us moving on our way. We stopped to talk to a friend of mine as she walked down the street and since she has 2 kids who have both lost teeth and this was the first time for both K and myself we asked her to take a peek. She smiled and told K what I had already said. How exciting this was. That she was about to lose her first tooth! That the tooth fairy would probably be coming TONIGHT!

K’s tears came in greater waves and we carried on.

“An apple” K exclaimed with one finger in the air, “I need an apple so I can bite it and get my tooth out!”

We took a detour to the grocery store for apples! and caramel! and a bottle of water (I was parched)! and a jar of pickles! (we were out). Then with a bag full of clothing I bought when I was shopping with Missburrows, my purse, a heavy bag of groceries and a sobbing child and her backpack we headed home.

It was a really long walk, not so much for the distance but from the weight of merchandise I was carrying and the slow gait of a scared little girl, but we made it home eventually.

I took another quick peek at K’s tooth and then sent her into the bathroom to wash up while I sliced an apple. When she joined me, still in tears, I handed her an apple slice and took one of my own. As she sat down I showed her what I thought would be the most effective method of getting the tooth out through clever use of apple…

“Call Daddy” she cried… and so I did and got his voicemail.

“Call Nana” she managed between sobs… and so I did and she answered.

I explained to my mom and Dr. Normal what was going on and K tried again. Nothing happened. I was about to tell her that maybe it was too soon when suddenly…

Her tears turned to shock, her shock to joy, her joy to horror as she realized she had NO IDEA where her tooth had gone.

“I have to go, I’ll call you back” I yelled into both phones at once.

I looked at K in her moment of pure panic and then glanced down at the plate I’d given her for her tooth and apple and there it sat looking like a teeny tiny little piece of apple. I whisked it away to put into a cup and then filled a mug with salt water for her to rinse with.

At 2:52 on Tuesday September 9th, 2008 my little girl lost her first tooth. In the scale of things, in the story of her life, in the history of the world this might not be a big moment… But today it feels like the most important day ever. 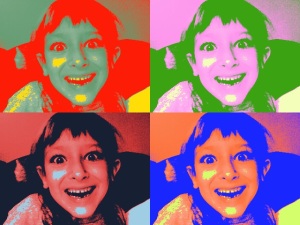 Congrats on loosing your first baby tooth K! I love you.