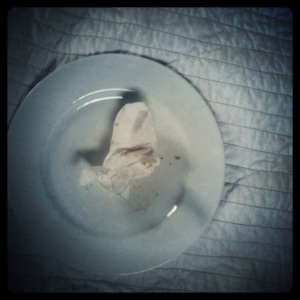 I was honestly under the impression that I don’t want pizza often.  It’s not that I don’t like pizza.  It’s just that I can’t eat it all the time.  It could have been the weekly pizza night as a kid.  Or the fact that I have a kid and those things are like little pizza eating machines.  Whatever the reason, when the question “What’s for dinner?” is asked “Pizza.” is not the answer I long to hear.

But last night a late night pizza dinner was exactly what I wanted.  I had it delivered just like they did in the olden days so I could lay in bed watching movies and munching on the cheesy saucy sausagey goodness.  And it was… well it was okay.  The pizza was okay pizza which is what I was expecting but I thought since I was in the mood for pizza there would be some moment of cosmic pizza goodness in which my tongue and tummy rejoiced and praised the pizza lords for this meal on a crust.

Eh.  There were more interesting things going on.

But this morning??  THIS MORNING?!  It was like a choir of angels singing down from above as I delicately chewed each bite.  You should read “delicately chewed” as “ripped into”.  It was pizza.  It was breakfast.  It was glorious.  And now I have to contemplate some of my other breakfast faves.  Cold fried rice from the takeout container.  Re-heated soup.  Tacos.  And yes… corned beef and cabbage.

A light came on.  I do love pizza.  I DO.  But just for breakfast. It really does explain the appeal of brinner.

If you want to keep up with the mildly interesting project @turoczy and I are working on you can follow along here on Instagram @mildlyinterestingpeople. And probably subscribe on those places you like to listen podcasts or whatever…
Y'all... I can't anything right now. But I went to see the magical @style_by_nicolettec today and seriously she made my hair look just like my heart thinks it's supposed to and that's the best I've got today.
If I could I'd spend the day with this view of my bedside table. Everything is really difficult right now. Like moving through jello. But I'm getting up. And I'm thankful for all the love and support in my life. So I guess what I'm saying is that it's okay that everything isn't okay. I got this. Time for some @snoopdogg affirmations and tea before I dive into the responsibility of work and the outside world.
Decor decisions are brutal around here...
Spike is an entire mood tonight... #blackcatsofinstagram #blackcat
Made it to Friday… #blackcat #cat
Friday morning judgement is handed down... #blackcat
Yes yes I know I’m cranky, but my entire life I’ve failed to understand chain letters and wishing bad fortune on others. Stop with the bad luck threats to those who don’t post an old photo or whatever the gimmick. Can we try some love, support, and goodness instead? My own brain gives me enough to worry about without external ill wishes.
Seriously though, how fucking cute is this hat my daughter got me for Christmas?
Follow CamiKaos on WordPress.com